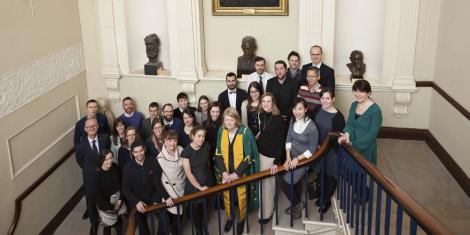 Two researchers based at the Mathematics Applications Consortium for Science and Industry (MACSI) in the Department of Mathematics and Statistics at the University of Limerick, Drs Kevin Burke and Francesc Font have been awarded the prestigious 2016 Charlemont Award grants for their research projects. These grants facilitate short international visits for early career researchers to pursue primary research and/or training. In 2016, the Royal Irish Academy (RIA) awarded 30 Charlemont grants, which were named in honour of the Academy’s first president, James Caulfield, the first Earl of Charlemont (1728-99). The 2016 class of ‘Charlemont Scholars’ were recognised at an awards ceremony at a recent ceremony in Academy House Dublin.

Peter Kennedy, International Affairs Secretary of the Academy highlighted the importance of travel and the cross pollination of ideas for research. "The Charlemont Scholars are Ireland’s scientific and cultural emissaries of the twenty-first century. Through their experiences, sharing what they know and bringing back new ideas, we look forward to their enriching academic life in Ireland."

Dr Kevin Burke completed a BSc in Mathematical Sciences in the University of Limerick in 2010, during this time he was awarded the UL Gold Medal for achieving the overall highest degree result across all faculties of the University of Limerick and the prestigious Royal Irish Academy Hamilton Prize in Mathematics. After completing his degree Dr. Burke was successful in obtaining an Irish Research Council Scholarship for a PhD project in the area of statistics under the supervision of Professors Gilbert MacKenzie and Eamonn Murphy. After graduating with a PhD in 2014, he was appointed as Lecturer in Statistics in the University of Limerick where is also the also the new Director of MACSI’s Industrial Mathematics Unit. As a 2016 Charlemont Scholar, he will visit Professor Christian Bressen Pipper in the Biostatistics Department, University of Copenhagen for four weeks in May 2016. Dr. Burke will work with Professor Pipper on developing a new type of survival analysis model known as Multi-Parameter Regression model. Survival analysis aims to understand the mechanisms which influence the hazard (or risk) of (medical) events such as cancer, heart disease, Alzheimer’s disease, asthma, seizure, fall of elderly individual, successful pregnancy etc.

Dr. Francesc Font has an undergraduate degree in Physics from the Autonomous University of Barcelona, Spain. In 2010 Dr Font completed an MSc in Mathematical Engineering in Polytechnic University of Catalonia, Spain where he also obtained his PhD in 2014. During his PhD he was awarded a prestigious travel grant from the Catalan government to visit the Department of Mathematical Science in the New Jersey Institute of Technology, USA and was also awarded with the best presentation award at the Oxford Centre for Collaborative Applied Mathematics (OCCAM) 3rd Graduate Modelling Camp in the Oxford University. Dr. Font received the Cum Laude distinction (highest mark in the Spanish system) for the work carried out in his PhD thesis. Dr. Font joined MACSI as a postdoctoral researcher in August 2014 working with the Pharmaceutical Manufacturing Technology Centre, and has initiated collaborations with Drs. William Lee and Chris Edlin, and Professor Stephen O’Brien in the mathematical modelling of freeze-drying processes for the pharmaceutical industry. As a 2016 Charlemont Scholar, he will visit Professor Fernando Bresme in Imperial College London for four weeks in March to investigate phase change at the nanoscale using a Molecular Dynamics approach. Understanding phase change at this scale could be of great importance for a new generation of microelectronic devices such as phase change memories, optical circuits and flexible displays.

Professor Stephen O’Brien Founder and Co-Director of MACSI stated that “The award of the prestigious 2016 Royal Irish Academy Charlemont Award grants to Drs Kevin Burke and Francesc Font awards will allow these excellent mathematics and statistics scholars to strengthen their own careers through international mobility and developing strong collaborative networks.”