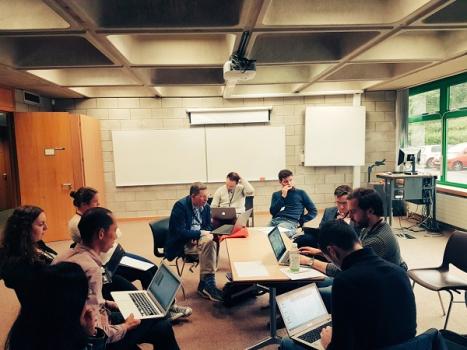 Mathematicians from all over the world, from New Zealand to Mongolia, gathered in Limerick to solve problems faced by Irish Industries at the 128th European Study Group with Industry. Over 5 days about 100 mathematical scientists worked on a wide variety of problems presented by Irish companies, from modelling what happens to a car during a crash in order to tackle insurance fraud to how microwaves measure water content in the raw material that produces alumina.

The European Study Groups with Industry (ESGI) programme is an innovative and collaborative way of tackling real world-problems faced by leading industries. These events have been described as "Hackathons for Mathematics"! The ESGI event has established itself as one of the largest industry and academia collaborative efforts in the world, having first been launched in 1968 at the University of Oxford. The first Irish event was hosted by the Mathematics Applications Consortium for Science and Industry (MACSI) at the University of Limerick back in 2008.

>Dr Sinéad Burke, Manager at MACSI said “the problems presented by the companies at the ESGI events aren’t ones that we generally think of as mathematics problems. For example, questions like how to make a great cup of coffee or how to optimise the supply from blood donations to hospitals but maths has a great way of revealing hidden simplicity to give clever solutions to difficult problems”

This unique mechanism enables SMEs and multinationals to make use of the problem-solving skills available in universities will showcase the capability of Ireland on a global stage. MACSI Co-Director Professor James Gleeson said that “For the last 10 years MACSI has led the way in demonstrating the importance of applied mathematical modelling to the Irish knowledge economy. We have worked with over 30 companies from SME’s to multinationals and semi state bodies, and our projects have resulted in increased competitiveness for many Irish companies. To give just one example, a problem initiated at a previous study group by Rusal Aughinish Alumina grew into a year-long consultancy project with MACSI researchers, Professor Stephen O’Brien and Drs Vincent Cregan and William Lee. That project resulted in a 200 per cent increase in the accuracy of prediction of product quality, enhancing the overall efficiency and decision-making of the Rusal plant. In recognition of this. the project was recently awarded the 2017 Knowledge Transfer Ireland Consultancy Award “.

As well as solving real-world problems, the ESGI events are a fantastic way to train students with relevant skills that are in high demand by Irish-based companies. This event has received support from Science Foundation Ireland and a number of the SME’s participating have availed of Enterprise Ireland’s Innovation Voucher Programme.

MACSI works with companies throughout the year using cutting-edge mathematical and statistical modelling techniques to develop insights and provide innovative solutions. The results lead to increases in productivity and reduced costs, which can ultimately enhance competitiveness for the industrial partners. For more information on the type of industrial problems in the past and how to contact MACSI to work on a your problem click here or email MACSI@ul.ie.